Not all rooftops can bear the weight of glass PV modules. Some others have curves and shapes ill-suited to uniform, bulky panels. Flexible modules have long been advanced as the solution here, however the keys to unlocking this potential have proven elusive. 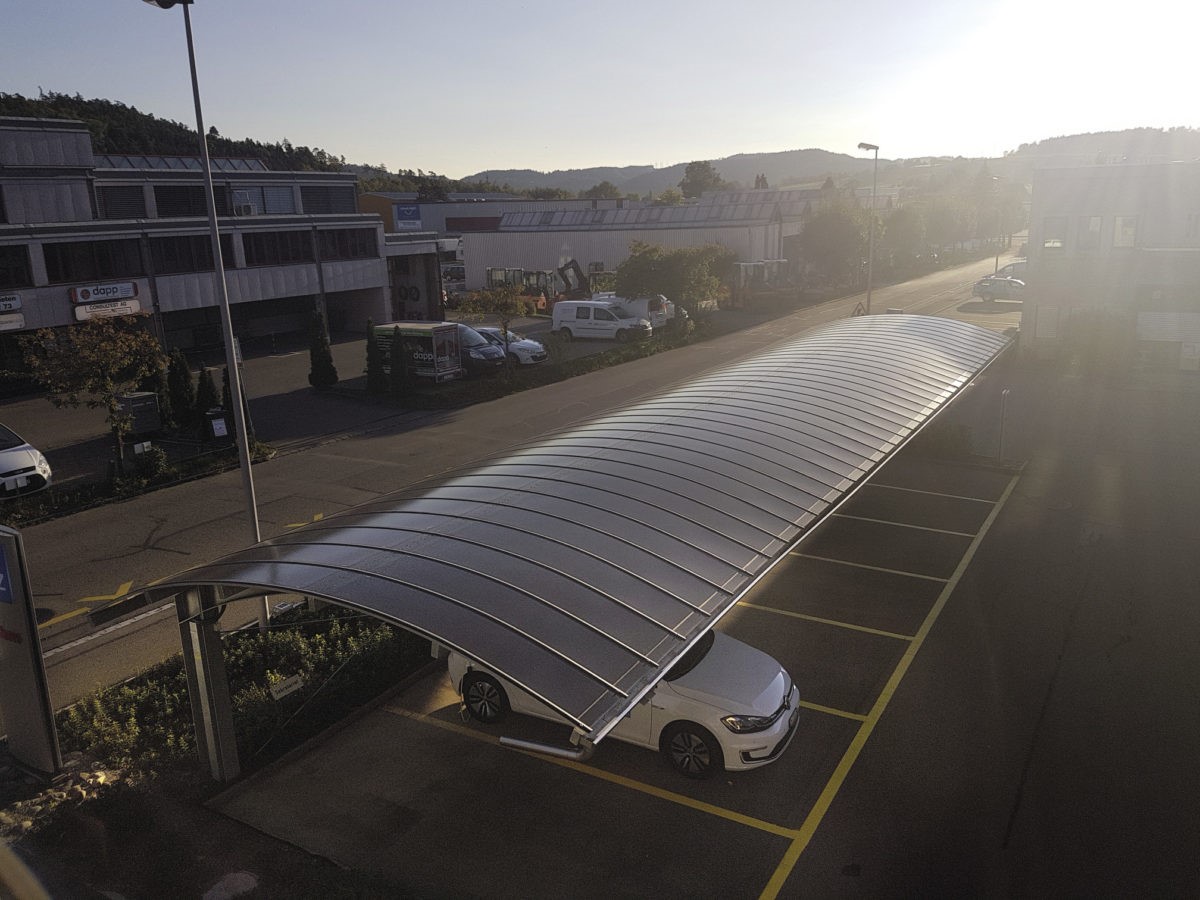 With robust market demand and the expansion of bifacial module applications, PV manufacturers are facing a shortage of solar glass. This shortage, claims the founder and former CEO of pioneering Chinese solar maker Suntech, Shi Zhengrong, has caused the prices of solar glass to increase by up to 40% and left module producers scrambling to lock in long-term supply contracts.

While nothing new, bifacial modules are increasingly viewed as a mature solar technology, with the rear side electricity production delivering a bonus to project developers. Bifacial cells have been encapsulated into modules with traditional white backsheets in the past, LG's Neon range is a notable example, and transparent rear backsheets are also available at comparable prices to glass. However, dual-glass bifacial modules dominate – and as demand for bifacial has increased, glass makers have not kept pace with supply.

BloombergNEF confirms that PV glass prices increased by 75% between July and November 2020, on the back of the supply bottleneck. It notes that the shortage is particularly pronounced for 2mm glass used in dual-glass modules. However, as a result of a number of policy measures taken by Chinese administrators and suppliers expected to ramp production by over 35% in 2021, BloombergNEF expects solar glass prices to normalise to pre-shortage levels in the first half of the year.

Shi Zhengrong has a vested interest in highlighting the shortage of glass currently gripping the market, as he now heads up the module startup Sunman – which encapsulates crystalline silicon (c-Si) solar cells in a polymer composite material, to produce lightweight modules. With a weight of 5.8kg with a 5.6mm frame and 8.1kg with a 35mm frame – both in a 60-cell configuration, the Sunman modules are promoted as being applicable in rooftop arrays where the roof structure cannot bear the weight of traditional glass modules, and for the use in e-mobility.

Shi says that a wealth of opportunity exists for lightweight modules for rooftops in sunbelt regions, such as Southeast Asia or southern China, where roofs are not constructed with the weight of winter snowfall in mind. Sunman reports that it has shipped approximately 50 MW of modules over three years and is anticipating that its annual shipments will grow to 40 MW in 2021.

“There are many lightly structured commercial rooftops which cannot handle the weight,” said Shi, “at the moment, with policy movements, everyone wants to put solar on their roof.”

Rooftops not available to glass modules have long been seen as an opportunity that can be supplied by a range of non-crystalline PV technologies. These include a range of thin films, such as amorphous silicon, dye-sensitised solar cells, copper indium gallium selenide (CIGS) PV, and organic PV (OPV).

To produce such modules, the semiconductor material is deposited onto a flexible substrate – previously stainless steel was common but today polymers are increasingly used. This deposition of the semiconductor can be achieved through slot-printing or ink-jet processes, attractive due to their low cost. Evaporative deposition has also been used for higher-efficiency thin films.

Roll-to-roll (R2R) production, where the substrate can be unwound, passed through the processing steps and rewound, can potentially be attractive due to high throughputs – and indeed is a very mature technology in the printing industry with more than 50 years of application.

Karl Melkonyan, an analyst with IHS Markit, says that while flexible thin film solar may be “attractive for certain applications” there remains “only a few hundreds” of megawatts in flexible PV production capacity globally. R2R, he notes, is the predominant process for flexible thin film production, accounting for more than 90% of output at present – although he notes that it is “difficult to provide precise numbers,” due to the small volumes.

R2R flexible thin film production has been deployed at noteworthy volumes by a number of CIGS manufacturers in the past, such as Global Solar and MiaSolé. Both could boast of a good track record of efficiency improvements, however neither was able to scale cost-effectively, and both were acquired by troubled Chinese PV entrant Hanergy.

Maurice Clair, the head of process development for laser equipment supplier 3D Micromac reports that alongside CIGS, amorphous silicon and OPV developers have both applied R2R techniques in production. He anticipates there to be increased activity in the space, given the weight limitations glass-based modules face.

Clair also notes that there is “quite a lot of development on perovskite on R2R processes,” and that, “you could argue that everybody that was working in the area of organic PV which have not been deposited in vacuum have now moved to perovskites.”

As to the challenges facing perovskite and other R2R thin film developers, the 3D Micromac technologist says that while the throughput offered by R2R is promising, its “sheer scale” presents other challenges. He explains that while c-Si production processes can be optimised in small batches of wafers, the same cannot be done on R2R. Additionally, Clair reports, some processes in R2R PV production are combined, further complicating process optimisation.

A further challenge, Clair says, is applicable to all flexible electronics and has been underestimated. “The [c-Si] wafer is a relatively small area where defects can occur. With thin film PV, you are talking about web widths of one meter, where you have to control evaporation processes, cleanliness and so on.” While scale can be promising, it does not come without challenges.

Sweden's Midsummer is a flexible CIGS producer that has opted to tread a different path, both in terms of the thin film community and in its business strategy. Originally conceived as a production equipment supplier, it applied its founders' experience in optical disk production to CIGS through its DUO production system – while simultaneously applying batch PV cell production techniques on a flexible substrate, rather than R2R.

Midsummer produces its flexible CIGS Wave modules in Sweden and is “currently planning” a 50 MW production facility in Italy, the company reports. Alongside lightweight applications, particularly in the C&I rooftop market segment, Midsummer highlights its low CO2 emissions and European production as having value for householders and businesses in the region – “especially the for property owned by municipalities, regional authorities and states,” says Midsummer's Christoffer L?fquist, the company's solar panel business area manager.

Midsummer's CIGS cells are cut from the stainless-steel substrate before processing, and then assembled into modules – allowing for “high quality, … short cycle time, high yield and output” production, reports L?fquist. In 2020 Midsummer introduced its “PowerMesh” cell interconnection technology in production and its modules now include a bypass diode between each cell, delivering enhanced shade tolerance.

In terms of markets, L?fquist says that the company is increasingly focused on southern European markets and has signed agreements with distributors in Spain and Portugal – where commercial and residential roofs are not typically built with heavy snow loads in mind.

IHS Markit's Melkonyan believes that perovskite, and indeed tandem-junction thin films, is likely the “most encouraging” technology pathway along which flexible PV can be developed. He points to perovskite as an additional absorption layer, on top of CIGS or cadmium telluride (CdTE), as being promising. He concludes that the primary challenge facing flexible thin film producers is the conversion efficiency they can achieve – particularly in light of continuous progress achieved by c-Si producers.

It appears likely that it is the hurdle of producing high efficiency flexible thin films at competitive prices that will be most difficult to overcome for its proponents. Crystalline silicon, with its hundreds of gigawatts of production capacity and relatively aligned technological pathways, is a formidable rival.

And while brittle c-Si cells, susceptible as they are to cracking, may appear unsuitable for flexible module designs, Sunman's Shi believes that thinner cells make this far from unavoidable. “If the solar cell thickness is below 100 microns then it starts to become elastic, so it is very hard to break it,” says Shi. “If we can make [c-Si] solar cells with 80 micron thickness, then we can bend like a thin film.”